The Triangulum Galaxy is a spiral galaxy approximately 3 million light years (ly) from Earth in the constellation Triangulum. It is catalogued as Messier 33 or NGC598. The Triangulum Galaxy is the third-largest member of the Local Group of galaxies, which includes the Milky Way, the Andromeda Galaxy and many other smaller galaxies. It is one of the most distant permanent objects that can be viewed with the naked eye.

Under exceptionally good viewing conditions with no light pollution, the Triangulum Galaxy can be seen with the naked eye. It is one of the most distant permanent objects that can be viewed without the aid of a telescope. Being a diffuse object, its visibility is strongly affected by small amounts of light pollution. It ranges from easily visible by direct vision in dark skies to a difficult averted vision object in rural or suburban skies. For this reason, Triangulum is one of the critical sky marks of the Bortle Dark-Sky Scale. 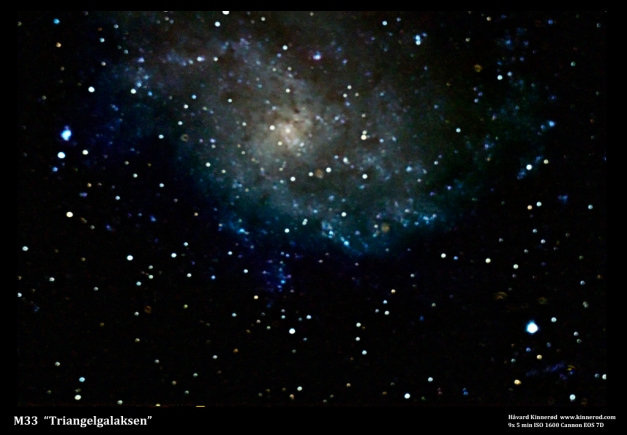